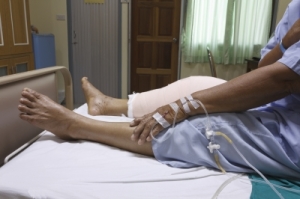 He was not terminally ill, and could live for many more years in a state that he regarded as a ”living hell”. Rossiter instructed his carers to remove the feeding tube from his stomach so that he would starve to death. His carers took his request to court, fearful they could be charged with murder, or assisted-suicide.

Australian law does not permit assisted euthanasia nor does it otherwise positively recognise any right to die.

In both cases, the Courts held that the law permitted the patient’s carers to remove their feeding tube, having regard to the fundamental principle that a person of adult years and sound mind has the right to consent to or refuse medical treatment, and to determine what shall be done with his own body.

Carers were found only to have a duty to provide the necessities of life where a dependent person lacks the mental capacity to make decisions on their own behalf. This meant that these patient’s carers would not be criminally liable for removing their feeding tube in response to a lawful & competent request.

This is a powerful step-forward for the principle of self-determination however it still stops well-short of euthanasia. Accordingly these cases are not about termination of life – merely the avoidance of artificial prolongation of life.

In the USA, the New Jersey Supreme Court allowed a respirator to be removed from Karen Ann Quinlan and the U.S. Supreme Court then declared that feeding tubes are medical treatments just like respirators, heart-lung machines, dialysis and antibiotics.

It ought to have been clear in U.S. law and medical ethics that those who cannot speak can have their feeding tubes and medication stopped.

But then came the infamous case of Terry Schiavo which caused a national furore, involving 16 years of grief for the family, and 13 years of litigation which even involved the US President. Just why it was so controversial is testament to the heat & passion of the polarised views in this area: The Right to Choose versus the Right to Life.

Terri Schiavo lingered in a persistent vegetative state in a Florida hospital, while her husband and parents of the 41-year-old woman waged a bitter and highly public legal battle over the removal of a feeding tube that had been keeping her alive after a heart attack caused permanent brain damage.

All these decisions highlight the need for legislative reform. Allowing a person to starve themselves to death (which can take several weeks) is hardly a compassionate or dignified outcome. You probably wouldn’t allow your cat to suffer unnecessarily, but you are not permitted to show the same mercy & compassion to your granny. Of course issues such as capacity, influence and elder-abuse require careful & open debate. However these issues already arise in numerous other contexts, so it is hoped that these ought not be insoluble problems to arrive at an appropriate set of safeguards.

In the meantime, there is something which all Australians can do right now to spare themselves & their families untold suffering & grief.

You can create an Advance Medical Directive (Americans call them Living Wills) which is a legal document designed to give your loved ones and doctors written instructions as to what type of medical treatment you want to receive, or do not want to receive, if you are seriously ill or injured and not expected to recover (ie if you suffer from a terminal illness, or enter a persistent vegetative state).

In Victoria and South Australia an individual can create both a Medical Power of Attorney and an Enduring Power of Guardianship.

With the exception of Australian Capital Territory and Northern Territory, all other jurisdictions will permit a Power of Enduring Guardianship.

In several jurisdictions there are possible “work-arounds” if more extensive and precise medical and “life-style” Powers are required.

In some States, such as South Australia and Queensland, there is the ability to create a specific Advance Directive regarding end-of-life decisions. These are sometimes called “Anticipatory Directions”, because they are a set of commands which you give to your treatment providers in anticipation of a specific health circumstance.

Unfortunately in 2010, there is not presently any uniformity or consistency between Australian jurisdictions regarding the effectiveness or binding nature of these types of documents, particularly if you die away from home, ie in another State or Territory from where you created the document. Nevertheless, even if such documents are not yet “binding” in all jurisdictions, they are very likely to be “persuasive”, and thus are certainly better than nothing.

Rod Genders is a senior Australian lawyer specialising in accident compensation and estate planning in Adelaide. His boutique specialist law firm is one of the oldest and most respected in Australia – visit it at www.genders.com.au . Rod is also a prolific author and speaker.  Some of his articles and books on Wills, Probate, Trusts, Estate Planning, Asset Protection and Retirement Planning may be found at www.genders.com.au/adelaide-lawyer-blog.