Elder Abuse and the growing problem of Early Inheritance Syndrome 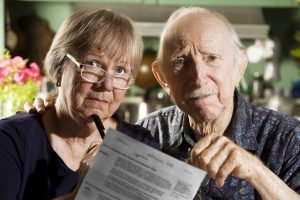 Approximately 10 per cent of older Australians are victims of financial or psychological abuse each year, typically from family and friends pressuring them to provide financially for others.

Many elderly parents do not report their concerns, out of a sense of family loyalty, or feelings of guilt, shame or embarrassment.

As we get older, we tend to be more trusting – particularly of those we have known for a long time.

A 2015 Victorian Royal Commission found that more than 90 % of elderly abusers were family members, and 70% of victims were female.

This is a growing problem that has no social or economic boundaries. It happens in homes, in granny flats, in aged-care facilities and in hospitals all around Australia.

A typical example is where an adult child ‘helps’ their parent to sell the family home, but some of the money disappears, and the child has a new car…

Sometimes, the elder is subjected to ongoing harassment for more funds or is pressured to amend a Will or withdraw superannuation.

These sorts of bullying behaviour are often accompanied by a sense of entitlement form the family-member – along the lines of “I deserve this”.

Justifications will often be made about how much they do for their elder, or that the elder does not need the money.

Very often the abuser tries to justify their immoral (and probably criminal) act by claiming that they would be receiving the money eventually anyway (when the elder dies), so it isn’t really stealing … it’s more like an advance on their inheritance.

Not only is this wrong in law (and ethically), but it’s also remarkable how few of these abusers actually bring this ‘advance’ to account when it comes time to administer the elder’s deceased estate.

In other words, they conveniently ‘forget’ about that earlier ‘inheritance’, and hold out their hand for a full share of the deceased estate as well.

Other typically abusive behaviour can include:

In 2017 the Australian Law Reform Commission published its report: “Elder Abuse – A National Legal Response”, which made some good recommendations including a national register of enduring documents; safeguards against power of attorney misuse; better management and regulation around self-managed superannuation funds; a tightening of controls about witnessing requirements in areas of powers of attorney and advance care directives.

The Law Council of Australia is working with state law societies and other organisations such as the Australian Banking Association, to better education of frontline advisers like medical, banking and financial planning staff so they can recognise the signs of abuse and report suspicious activity immediately, or provide advice.

Ultimately, each if us must take responsibility to protect our own families and our assets. A good first step is to take advice from a senior lawyer who specialises in modern integrated estate planning.