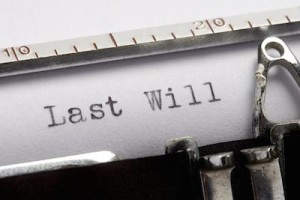 It’s not hard to find do-it-yourself Wills or Will-kits and other estate-planning materials, particularly on the Internet. Every TV advertisement for insurance seems to end with an offer for a free Will-kit nowadays, encouraging  the public to believe that it is simple to do it themselves.  But the topic is complicated, and the right solution is specific to each individual.

Some businesses (keen to make some money by selling you some expensive stationery) will try to convince you that making your Will is the legal equivalent of taking a headache tablet.   “Anyone can do it” they say, “It’s easy and it’s cheap”. But in truth, it’s more like trying to remove one of your own kidneys.    Just because you can try to do it yourself doesn’t mean it’s a good idea to try.  There are lots of risks and hidden dangers, which are not well-understood, and won’t become obvious until AFTER you’ve died (when it’s too late to correct them).

Home-made Wills can be a lot more expensive than you might think. Any mistakes you make with them can end up costing your family later on (disputed estates, family distress, huge litigation costs).

A legal Will is almost certainly the most important legal document you will ever create in your whole life.  It makes sense to take the effort to get it right.  However, people who wouldn’t even dream of trying to install their own toilet or air-conditioner, are having a go at creating their own legal Wills.

Approximately 2,000 estates per year become contested in Australian courts at an average cost of $52,000 each in legal fees & expenses, and some law firms make a good living out of the work generated from those kits – trying to repair the mistakes, interpret & rectify the intended Wills, and fight-off the contested estate claims – all because someone thought it was a good idea to DIY the most important legal document in their life.

The numbers of Court cases involving DIY Wills are growing rapidly, and there are many more claims which are negotiated without the need to proceed to trial, but still expose family members to considerable expense, stress, uncertainty, disappointment and delay.

The laws regarding Wills and estates are getting more and more complicated, and vary from country to country, and even within Australia they vary from state to state.  As an illustration, in some jurisdictions such as Victoria, step-children are included in the class of people potentially entitled to claim for provision out of a deceased estate, but in other jurisdictions such as South Australia they are not.  In most Australian jurisdictions divorce operates to revoke a disposition to the spouse however in WA it causes a complete revocation of the entire Will.

These laws also change over time, and the laws related to estate planning have also undergone rapid changes internationally over the past several years and are likely to change in Australia in the years ahead, too.

The modern development of “Domestic Partners” has created some interesting new challenges, particularly where someone dies without a valid Will.  Although bigamy is still illegal in Australia, (Marriage Act 1961 – Sect 94: A person who is married shall not go through a form or ceremony of marriage with any person) it is quite possible to have more than one “spouse” for the purposes of succession law , and all such “spouses” (including any number of defactos and domestic partners) can rank equally in the same category, and be required to share that portion of a deceased estate.

Australia is one of the few western nations not to have an inheritance tax (sometimes called death duties).  However we have had them in the past and some legal commentators believe we’re likely to have them again in the future.  They were one of the recommendations in the recent Henry Tax Review.  Such a tax would have profound implications for the estate plans of retirees.

If you’re creating or updating an estate plan, a specialist lawyer familiar with the local laws and procedures of your state will provide invaluable services that no self-help kit or software can offer. Not only can a specialist lawyer advise you how to ensure that your assets are properly distributed and that your health care proceeds in accordance with your wishes, but he can also do so with an eye toward protecting those assets (from creditors, bankruptcy, litigation etc).  While it’s natural to worry about the legal costs you might incur, the process is more affordable than people fear.

A huge range of factors add a layer of complexity to your personal circumstances that a DIY Will is very unlikely to be adequate to the task of addressing. A little knowledge can be a dangerous thing.  Mistakes can be very costly to your family, and DIY Wills make mistakes MUCH more likely.  Some of the more common examples of complexities include:

Almost all kits and programs currently available are not flexible enough to permit customised options, such as the ability to list two or more alternate executors to serve one at a time in the order named.   And take a look at the fine print in those Will kits – you might notice that they all have a disclaimer saying it’s not a substitute for proper legal advice – so will it be worth anything to your family when it really counts?

Don’t forget that after you’ve gone, challenges can be made to your Will or your estate and you won’t be around to explain or defend your decisions.  A scrappy couple of pages torn out of the back of a Will-kit booklet is not likely to satisfy a Court about anything very much.

One of the most prominent sellers of do-it-yourself Wills, LegalZoom is the target of at least one class action lawsuit in America, potentially involving more than 3,000 individuals, charging that the company engages in deceptive business practices and is practicing law without a license.

The lawsuit was filed in Los Angeles Superior Court in May 2010, by the niece of a man who used an online Will-making service to execute a Will and other legal documents. Based on the company’s advertising, they believed that the documents he created would be legally binding and that if they encountered any problems, the company’s customer service department would resolve them.

But after his death a number of the financial institutions that held his money refused to accept the documents as valid. His family tried to get help from the company with no success and was forced to hire an estate planning lawyer to sort out the mess. That lawyer also discovered that the Will had not been properly witnessed. All this cost the estate thousands of dollars.

The lawsuit claims that a lot of ordinary people relied on misleading statements by the company, and that their online computer program merely inputs basic identifying information, but is not tailored to the client’s specific circumstances, and that the company’s customer service representatives are not lawyers and cannot by law provide legal advice.

Improperly prepared estate planning documents are a ticking time bomb that can result in improper tax consequences and other items that could cost the estate and disappointed beneficiaries huge sums.

Rod Genders is a senior Australian lawyer specialising in estate planning and accident compensation. His boutique specialist law firm is one of the oldest and most respected in Australia – visit it at www.genders.com.au. Rod is also a prolific author and speaker.  Some of his articles and books on Wills, Probate, Trusts, Estate Planning, Asset Protection and Retirement Planning may be found at www.genders.com.au/adelaide-lawyer-blog.