A Death Tax by Stealth 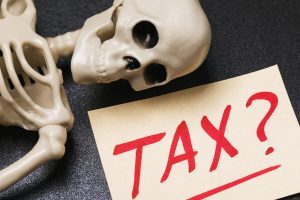 Did you know that your superannuation savings could be subject to a hefty tax when you die?

Most people don’t know it, but there are death taxes by stealth in Australia.

While it’s not an inheritance tax per se, millions of Australians’ retirement savings may be taxable upon death.

It all depends on your marital status and whether you have “dependants” (that is children or someone else who lives with you and financially depends on you).

If you are single and childless, and no one else depends on you, your super money will be taxed before being handed to the person you nominate to receive it — assuming you nominated someone prior to your death to get the money.

If you’ve got hundreds of thousands of dollars in your retirement savings and die, that money will be taxed up to 32 per cent before the remaining portion is transferred to your nominated beneficiaries.

Conversely, married people, those in a de facto arrangement and those with dependent children don’t face the same tax consequence in the event of their death.

While lone-person households used to be an anomaly, they are becoming more common.

According to ABS data, about one quarter of Australian households are now made up of people living alone.

This figure is projected to increase over time.

In 2016, the ABS recorded 2 million lone-person households, with that projected to increase to between 3 million and 3.5 million by 2041.

The ABS reports that just 78,989 marriages were registered in Australia in 2020, a 30.6 per cent decrease compared with 2019, with COVID-19 lockdowns playing a big part in people being unable to tie the knot. It is anticipated that when the 2021 data becomes available, it will show the same trend.

The ABS said 2020 saw the largest annual decrease in registered marriages ever reported by the ABS, and the lowest number of registrations reported since 1961.

While the rate of marriages locally might bounce back when COVID fades, global divorce rates are also rising and there is also a trend of more lone-person households.

Single-person households were the fastest-growing household type globally in 2010-2019, expanding to 31 per cent, with nearly half this growth in absolute numbers attributable to the Asia-Pacific region.

Divorce rates have also been surging globally and populations with a divorced marital status will be the fastest growing cohort.

Over the same period, the number of single-parent households will grow at three times the rate of couple-with-children households.

It predicted almost all countries would see a decline in children per household between 2000 and 2030.

Almost all countries will see a decline in children per household over the period 2000 to 2030.

As fewer couples have children, the report suggested, the number of childless-couple households will surge worldwide, far outpacing growth in couple-with-children households.

This all has an a effect upon how your super will be treated for tax purposes when you die.

Maybe it’s time to put your affairs in order, and create a modern integrated estate plan before it’s too late?

Be cautious, and take advice before you decide.

When it comes to Wills, asset protection & estate planning in Australia, you can trust the oldest law firm in South Australia, Genders & Partners to guide you through the tough decisions you must make for your family’s future care and welfare.

If you have any questions, or would like further information, please call or email us. Would you like a quick phone call to discuss? Feel free to phone or email us or use this link and book a timeslot for a free 15-minute phone consultation on my schedule: https://calendly.com/genders

Can’t get to us? No problem. We now offer home or office visits to many areas in the Adelaide metropolitan area at no additional cost. Call us on (08) 8212 7233 to enquire further.

We can help you to protect yourself and your family. We look forward to being of service.

eBook “7 Things You Must Know Before You Make Your Will”

Separation, Divorce and Superannuation
May 9, 2022