Death Duties (I told you so)

Back in the 1970s each Australian state had its own version of an inheritance tax (called ‘death duty’).

We haven’t had them since 1981, but I have been warning about the return of Death Duties for years now, and I continue to do so.

Australia is the only western democracy in the world not to have some form of death duties.

In May 2019 Australia will be having a federal election. Almost every commentator believes that there will be a change of government.

The last time Australia had a federal Labor government, it commissioned a review of Australia’s taxation system, which identified 6 areas of future opportunities and challenges governments will need to address in respect to taxation.

At the very top of his list was: “the ageing of the population, posing challenges for the financing of retirement incomes and of increasing health and aged care needs”.

Without such tools, governments would otherwise be compelled to continue to rely on bad taxes to achieve their spending objectives.

A number of senior political commentators have recently speculated in mainstream Australian newspapers, that Death Duties, Estate Taxes or Inheritance Levies might well be options likely to be seriously explored, as part of the current tax-reform debate.

On 12 March 2019 Malcolm King wrote in the InDaily publication: “The time has come to reintroduce an inheritance tax on estates above $1.5 million.

The Henry Tax Review gave in principle support for such a tax…inherited wealth is unearned income. It’s not gained through thrift or hard work. It’s an ethically sound tax which could be used to house the homeless, create jobs for young people and down pay HECS and VET Student loans”.

The Australian Green Party is one organisation pushing for a return of the tax. Australian Council of Social Service chief executive Cassandra Goldie has been quoted as saying that a bequest tax “deserves to be included among the reform options being considered as it is widely regarded by the experts as a fair and efficient tax“.

Opinion in business groups is divided, but there is some support for it, especially if an estate tax could be used to offset cuts to business taxes or flatten income tax rates.

I predict that the Federal Government will reintroduce some form of inheritance tax or death duty. It’s too big a honeypot for the government to ignore.

Death duties used to be a state-based tax. Now that the states carve-up the GST revenue, I doubt that any State would be willing to risk the flight of capital likely to occur if it re-introduced death duties. So what is a greedy (or desperate) premier to do? Try to impose a tax that isn’t called a tax, of course.

Until March 2016, the Court fee for a Grant of Probate in Common Form in South Australia was a flat $1,114.00, regardless of the value of the estate.

This changed from 28th February 2016, but only the very smallest estates saw any reduction in the Court fee. Everyone else is now paying more. And then the SA Government increased these fees again just 4 months later, and every year since!

The new fee structure is:

Don’t blame the Court or the lawyers – this fee is entirely a South Australian (Labor) Government decision. The Court does not keep this fee – it goes into general revenue for the State Government to spend on, well … whatever it wants.

(If you think SA has it bad, consider last month’s news from UK where a parliamentary legislation committee has just voted in favour of the ‘probate stealth tax’, which will raise probate fees for higher-value estates in England and Wales to as much as AUD$14,000.00, starting in April 2019. This replaces their existing fixed-fee system.)

This is not the end of it. Keep an eye out for my further articles on Australian Estate Planning Predictions for 2019.

For more information on asset protection, creating a modern integrated estate plan or other estate planning topics, explore our articles and visit our website today to schedule 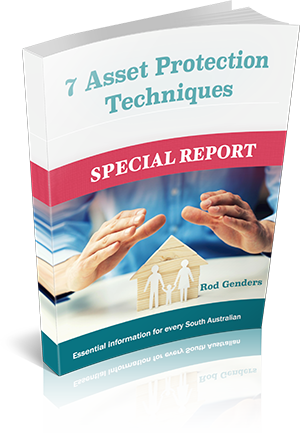 Check out the full report containing all 7 Asset Protection Techniques from senior Australian lawyer Rod Genders.  Valuable insights to prepare for the future and help protect yourself, your family and your assets.

What is Probate and is it always required in South Australia?
October 24, 2018

12 Dangerous Stresses of Administering a Deceased Estate in SA
October 24, 2018